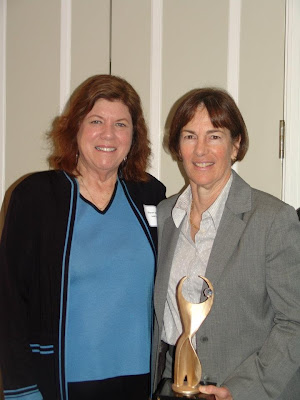 Cardinal Women’s Basketball Coach & JobTrain Board Member Tara VanDerveer, Receives Prestigious ATHENA Award!On November 16, 2011, Stanford University women’s basketball coach and PROUD member of JobTrain’s Board of Directors, Tara VanDerveer – was honored by the Palo Alto Chamber of Commerce with the prestigious ATHENA award. Each year, the body receives hundreds of recommendations and nominations for exemplary professional women that personify excellence in their professional and personal lives. Perhaps the hallmark of the ATHENA award is selecting a woman that achieves remarkable success in her own right and creates opportunities and trail blazes on behalf of other women to follow. JobTrain’s Executive Director and 2001 ATHENA winner Sharon Williams, presented VanDerveer with the coveted award. Williams praised VanDerveer for her brilliant career on the court, her recent induction to the Naismith Memorial Basketball Hall of Fame and for serving as a role model for many young women across the world, especially those at JobTrain. VanDerveer accepted the award from Williams and humbly said, “I’ve been called a lot of things. But, I have to say, a goddess has never been one of them.” She further added that Athena was her favorite Greek mythological character. VanDerveer credited her mother (not in attendance) for instilling the core values and humility that keeps her grounded today. According to VanDerveer, her mother once told her, “Tearing others down – doesn’t make you any better.” Words to live by indeed. After the standing ovation and applause, VanDerveer was presented with a proclamation from Palo Alto Mayor Sid Espinosa along with his praise for being the instrument of change and inspiration for the community. Despite her demanding schedule and need to return to hear team, VanDerveer graciously signed autographs and posed for pictures with her fans.