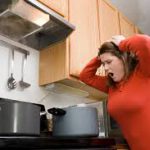 …I was judging an FHA Hero statewide culinary competition in Fresno, Calif. The other judge on my team was the head of the culinary department at a local community college. In judging one item, he looked at me and said, “Everything can be fixed in a kitchen except burnt and stupid.” I looked at him and chuckled. “I don’t know, I’ve fixed a lot of burnt and a lot more stupid mistakes over the years.” He asked me for an example and I told him a story.

I was running a restaurant and had an extern from a top culinary school. We were catering a buffet style offsite Mardi Gras event for 75 people. The desserts, also buffet style, were to be pecan pie and bread pudding, both accompanied by bourbon sauce. My pecan pie recipe involves removing the pies from the oven before they are fully set. The recipe then (and still does) talk about carryover heat and that if you wait until the pies fully set before taking them out of the oven they will burn.

Guess what my intern from one of the top culinary schools did with 10 pies? He came to me and said the pies were burnt and that he would make 10 new ones. I explained that, unlike culinary schools which stock many ingredients, restaurants only stock what is needed between deliveries. Thus, I didn’t have any more pecans. He offered to go to the store and buy them out of his own wallet. I told him, slightly perturbed, to look at the clock. We were leaving for the location in about an hour.

He started freaking out and looked on the verge of tears. “Don’t worry,” I told him, “I have a back-up plan.”

Want to read more articles by Chef Adam? Click Below!