Visionary of Hope & Ambassador to Opportunity for All: Reflection of the Life & Legacy of Leon Sullivan

Today, we reflect upon the life and legacy of OIC founder
and visionary Leon Howard Sullivan.
Reverend Sullivan was born on October 16, 1922 and passed
away on this day in 2001.  Leon Sullivan was a Baptist minister, a civil
rights leader and led the crusade for creating job training opportunities for
Blacks. Sullivan helped organize the march on Washington, D.C., in the
1940s.  Sullivan knew that jobs were critical in order to improve the
living conditions of Blacks. In 1958 he requested that the largest companies in
Philadelphia interview young Blacks. After only two companies responded
favorably to Sullivan, he organized a boycott of various businesses and
regarded the act as “Selective Patronage.” Sullivan coined the slogan, “Don’t
buy where you don’t work.” The boycott was remarkably effective as Blacks
accounted for 20% of the population in Philadelphia. The end result: the
boycott generated thousands of jobs for Blacks in the span of just (4) years.
The New York Times ran the story on their front page. Fortune magazine’s
coverage of the situation put Sullivan and his program on the national map of
public awareness. 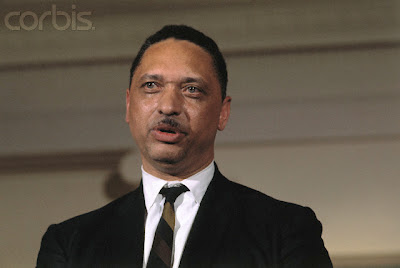 In 1962, Sullivan’s Boycotts were recognized by
Dr. Martin
Luther King Jr. and the Southern Christian Leadership Conference who persuaded Sullivan to
share information with them on his success. The exchange led to SCLC’s economic
arm, Operation
Breadbasket, in 1967, headed by Jesse Jackson.
Sullivan’s “self-help” principle was an ideology based in
the belief that people need tools to help themselves overcome barriers of
poverty and oppression. Blacks were systematically excluded from better paying
jobs as they were denied access to the requisite training. Sullivan’s vision
and plan to help individuals obtain self-sufficiency was crystallized when he
realized that jobs in of themselves were not enough. According to Sullivan: “I
found that we need training.  Integration without preparation is
frustration.”
In 1964, Sullivan launched Opportunities Industrialized
Centers (OIC) of America. The program offered individuals with little hope and
few prospects the opportunity to obtain critical job training and life skills
to help them sustain employment. The innovative concept swept the nation.
As of date, with scores of affiliated programs in (30) states and the District
of Columbia, OIC has prospered into a highly regarded movement, and has helped
more than 2,000,000 disenfranchised and under-skilled individuals transform
their lives.
OICW, Opportunities
Industrialized Centers West (JobTrain) was established in 1965.  In 2008,
OICW changed their name to JobTrain.  Since 1965, JobTrain continues to
transform lives and communities in Silicon Valley. For nearly  five
decades, we’ve helped the Valley’s most in need reclaim their lives from
poverty and unemployment by preparing them for successful careers in high-demand
fields. JobTrain transforms personal motivation and potential into real skills
that are the foundation for self-sufficiency and self-worth. In addition to
“vocational training,” we understand that these fundamental transformations
require a high school diploma, computer literacy, an interview outfit and
ongoing encouragement, as well as access to basics like housing,
transportation, counseling and childcare. Our
165,000 individual success stories prove that powerful transformations happen.
And it takes time, commitment and the right resources.
Sullivan made history multiple
times, especially when he became the first Black to join the Board of Directors
at General Motors in 1971. Six years later, Sullivan instituted a code of
conduct for companies doing business in South Africa, regarded as the “Sullivan
Principles,” this was a solution to complete disinvestment. Sullivan was
instrumental in ending apartheid by lobbying large corporations such as GM and
others to voluntarily withdraw from conducting business in South Africa.
Today, we honor an incomparable
visionary and selfless leader that established real opportunities for
individuals to help themselves.
We celebrate Leon Sullivan’s exemplary life, for creating the foundation which has sustained JobTrain for
almost half a century, and for creating the international affiliate offices – that
believe in the potential of every human being and encourages them to always
strive for achieving their personal best.
2013-04-25T00:37:00-07:00