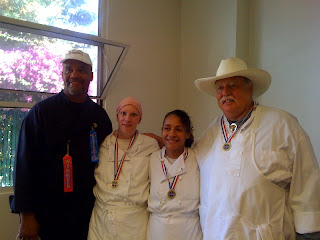 You’ve never seen an Iron Chef competition like the one that took place at the San Mateo Women’s Correctional Center on August 17, 2010. Inmates partnered with county officials and JobTrain in teams of four – in a unique cook-off. District Attorney Jim Fox, Supervisor Rose Jacobs Gibson, Sheriff’s Captain John Quinlan and Deputy Chief Probation Officer Ken Pesso – exchanged their law enforcement duties to collaborate with people turning their lives around through Culinary Arts. Chef Elihu Kittell of the jail, was the mastermind behind this activity. However, it’s been in the forefront of his thoughts since 2006 when he launched the cooking program. Kittell felt a sense of urgency to “give back to the community” and recognized the need for a program that would not only provide recreational activities for the incarcerated – but, marketable skills that would sustain them upon their release. Four years later, he partnered with JobTrain and longtime friend Chef Adam Weiner. Together they instituted a curriculum wherein JobTrain teaches Culinary Arts once a week to the inmates. According to Lieutenant Lisa Williams, “It’s been a fantastic partnership that transitions inmates into employable women – equipped with real training so they can get back on their feet.” Jenelle DeLugg was in custody when she met Chef Weiner. Her exemplary behavior qualified her for the jails’ work furlough program. She’s made remarkable strides in her life which she solely contributes to the jail staff and JobTrain. “They really believe in us – you can be more than just a criminal in their eyes.” DeLugg was released on August 4th, resides in South San Francisco and is enrolled in the Culinary Arts Program at JobTrain. Her dream is to open a restaurant in Palo Alto with fellow classmates. Jail is a place of last resort. However the programs it offers and even participation in the cook-off – establishes a new beginning. According to Sheriff Greg Munks, “The goal of the cook-off is to showcase that we have a number of people in our custody. They’re our neighbors, and for whatever reason they’ve ended up in jail. Our way of incarceration is now being fused with opportunities and job training. Jobs give people a sense of self-worth and makes them part of the social and economic fabric of community. The cook-off demonstrates that we’re all in this together.” Four teams consisting of two inmates, one JobTrain student and a law enforcement official, all came together and prepared jambalaya, salmon, black pepper biscuits – and an array of fruit and vegetable salads – and a killer pecan pie. In the end, Sheriff Greg Munks, Assistant Sheriff Trisha Sanchez, Judge Steve Hall and Supervisor Adrienne Tissier, were tasked with selecting the winner. It came to no surprise for Sheriff’s Captain John Quinlan that his team, “The Fantastic Four” won. However fellow teammates Amilia Otis and Laura Engman – were literally shocked to tears. Otis, mother of 6, looks forward to attending JobTrain upon release. “I’ve learned my lesson and will never return to jail. Thankfully this program has given me what I always needed – a true sense of purpose.”