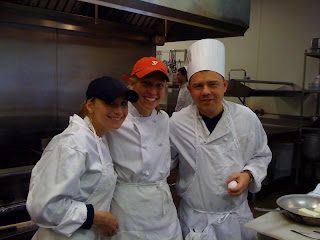 In addition to being CEO of Polyvore, the leading community site for online style, Sukhinder Singh Cassidy is a JobTrain board member.Today she brought 21 Polyvore colleagues to JobTrain for a team-building exercise in collaboration with the Culinary Arts program. The Polyvore crew was divided into 5 teams and worked with a senior JobTrain student to prepare the following menu:
Soup or salad of team’s choosingAppetizerVegetarian entrée of team’s choosingSalmon with corn and Fingerling potatoes (official recipe from Chef Jeff Henderson of the Food Network)Pecan pie or bread puddingThe creative crew from Polyvore identified their teams as: “Red Hot Chili Peppers,” “Skinny Jeans High Waist Pants,” “Karl Lagerfood,” “10-13” and “Harold & Kumar Go to JobTrain.”Instructor Chef Adam Weiner, encouraged the teams to be creative, have fun and to trust the team-building process. With laughter and smiles abound, there’s no doubt everyone had a great time.According to Jen Yuille, Polvore’s Head of Marketing & Communications, “JobTrain is amazing. It’s a very empowering place that has created a great opportunity for team-building.”After two hours of cooking, the teams were judged by invited guests from the W Silicon Valley and the American Culinary Federation.Despite the delectable entrees plated to perfection by all the teams – “Karl Lagerfood” won the competition. However, all the participants were winners in their team-building exercise.