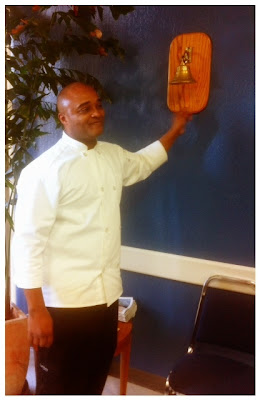 The BEST way to start a week at JobTrain is with a bell ringing ceremony!On February 27, 2012 Culinary Arts student TRA’CEY DUNCAN was ringing the bell so loudly – that you may have actually heard him.TODAY he begins his first shift as an evening Prep Cook at the awesome and newly opened restaurant The Dancing Pig! This place is already receiving rave reviews for their delectable and totally delicious BBQ ribs.Tra’cey is committed to maintaining his course of study at JobTrain while working in the city. He’ll graduate in May. In addition to being a stellar student, TRA’CEY has accumulated more volunteer hours at JobTrain than any other student.Please join me in congratulating Tra’cey! And be sure to say “hello” when you’re placing your order at The Dancing Pig!
http://blogs.sfweekly.com/foodie/2012/02/dancing_pig_opens_strong_1.php
2012-02-29T02:33:00-08:00