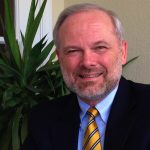 Schmidbauer began his career in Bay Area nonprofits as a front-line social services worker at FamiliesFirst, now part of Uplift Family Services. He went on to supervise Intensive Family Preservation services in Contra Costa and Solano Counties, and then to manage Community-Based Services. He was then tapped to be Executive Director of Child Family Health International, overseeing and growing its global operations.

“I have been so lucky to work with the most talented leaders I have ever met in Nora and Barrie. It has been my pleasure to serve with them both.” Schmidbauer said.

In the 2019-2020 fiscal year, JobTrain is experiencing growth in programming and in developing new services in Santa Clara County. “This growth is due to the outstanding work of our staff and in particular the management team,” said Hathaway. He continued, “Steve has brought tremendous skill, experience and compassion to his role at JobTrain. In his tenure at JobTrain Steve has overseen the cultivation of this growth of our work, and has led the development of our staff, creating a deep talent bench for JobTrain.”

Art Taylor, JobTrain’s Chief Program Officer, is promoted to Chief Strategy Officer and Hayam Demian, JobTrain’s Director of Instruction and Career Development, is promoted to take Schmidbauer’s place as COO. “We have been intentional about succession planning and we are happy to have the talent internally to take on these rich and challenging roles,” Hathaway said.