In His Footsteps: Remembering the Legacy of OICW Founder Leon Sullivan 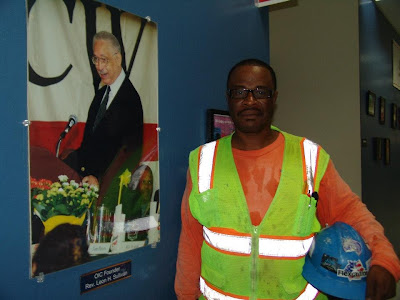 Teacher Knows Best: Randale Conner Receives LEON SULLIVAN Legacy Award(Nomination Received)Dear Selection Committee: Math is an integral part of Project Build. As Chuck Bragg, the Project Build instructor likes to say, if you can’t do the math, you can’t survive in construction. The first time I met this particular student was in the math class I teach to every incoming Project Build class. Some students figure they already know the math, some never want to know it, and some are determined to learn every- thing they can about it because they sense its role in their future. My nominee falls into the last group. This student came into Project Build after some bad decisions that afforded him free housing as a guest of the county. Whether he didn’t like the food or the atmosphere, he was determined not to make that mistake again. He absorbed everything that Chuck and I had to offer him in the class. After graduation from Project Build, he went into the Laborers’ Union. He did his initial apprenticeship training in San Ramon where one of the first classes the apprentices have is math. One evening, as I was standing by the front desk, in walked this student with a full-face grin. When I asked him what he was grinning about, he whipped out a decimal/fraction conversion card from his pocket. “We had a math test today. Remember the fraction/decimal conversions you taught us? Ishmael and I didn’t even need to refer to this. We shined!” I received the first of many hugs from this student. He went on to distinguish himself in his apprenticeship training and was assigned to the SFPUC Hetch-Hetchy Project. His main job, among others, was to coat the weld seams of the pipe, both interior and exterior, with cement. This wasn’t just a task for him. he could explain WHY this was necessary and how the whole project fit together. He listened, he fit the bits and pieces of information together, he understood, and he was determined to do an excellent job because he understood how important this project is to the well-being of this and surrounding communities. He threw his whole heart into his work. One night as I drove south on El Camino through Redwood City, I encountered the crew as they were in the process of crossing El Camino with the pipe line. This student was there directing the traffic around the detour. Two weeks later I encountered him again on Middlefield as they were running the pipe under that road. Again, his courtesy and clear involvement in the task grabbed my attention. Several months later he was across the street helping to bury pipe under our parking lot. Whenever he had a chance, he would drop by to update us on the progress of the project and his own progress. His willingness to give it everything he had was paying off. Not only had he had steady well-paying work for over a year with more to come, he also proudly informed me that his superiors were so happy with him that they were going to cut his apprenticeship short a year and promote him to journeyman and make him a foreman. That’s the kind of progress we want to see in a JobTrain grad! His determination to turn his life around, his full commitment to doing everything he could to be the best at what he was doing, his willingness to put his whole self into what he was doing has paid off. He has not only actualized the hopes that Chuck and I had for him, but he has validated the hope that Leon Sullivan had when he founded OIC. This JobTrain grad is day by day proving that opportunity, when accepted, can indeed change lives. It is my distinct pleasure to recommend Randale Conner for the 2011 Leon Sullivan Award. Sincerely, Karen M. Lundberg Lead instructor, ASE/GED Instructor