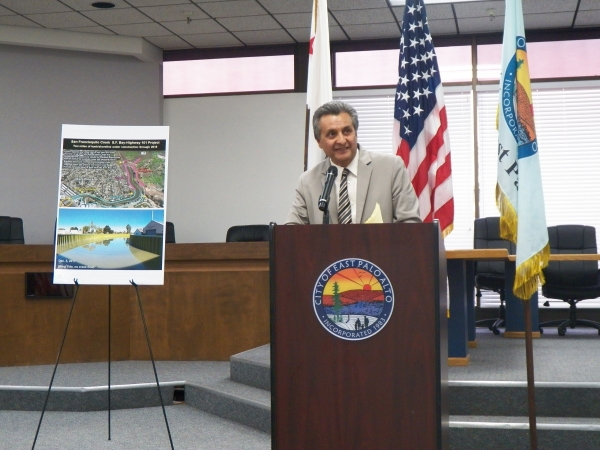 On Monday, August 30th, 75 City Council Members joined East Palo Alto Mayor Ruben Abrica during his ‘State of the City’ Speech, where he addressed the City’s achievements in fighting crimes and improving the city’s infrastructure.

One of the attendees was Ruben Avelar, JobTrain’s Outreach, Admissions, and Supportive Services Manager, where he commented on the Speech.

Ruben Abrica spoke eloquently about the huge strides the City has made recently, such as the building of the pedestrian overpass walk way project, the Cooley Landing Education Center and the San Francisquito Creek flood abatement project, but what stood out the most was when he mentioned that there has been zero homicides to date in East Palo Alto. This statistic alone exemplifies how far East Palo Alto has come. As a lifetime resident and a pro city activist 30 years ago, I’ve seen many changes: some good, and some bad, but one thing that I can say is East Palo has finally turned the corner and the best is yet to come.

As I listened to the Mayor speak, I looked around the city council chamber and couldn’t help but notice the obvious diversity in the community that gathered for the State of the City address.  It was quite impressive to see what East Palo Alto has become – a true melting pot.  East Palo Alto is very special and holds a lot of promise for the future.

JobTrain is an organization that is much embedded into East Palo Alto’s history. Our presence is strong in many communities in San Mateo County, particularly in the communities of East Palo Alto, North Fair Oaks, Belle Haven and Redwood City. JobTrain started in 1965 and has been a part of the fabric of the local community ever since.

We are a community partner who understands that community is made up of residents, other community-based organizations, and regional employers. The students and communities we serve provide input on program design and implementation. Committed to being responsive and collaborative, with programs designed to support all members of the community, JobTrain takes pride in our long history of inclusive and collaborative community engagement.

Click here to read our full Community Engagement Vision along with JobTrain’s mission and vision.